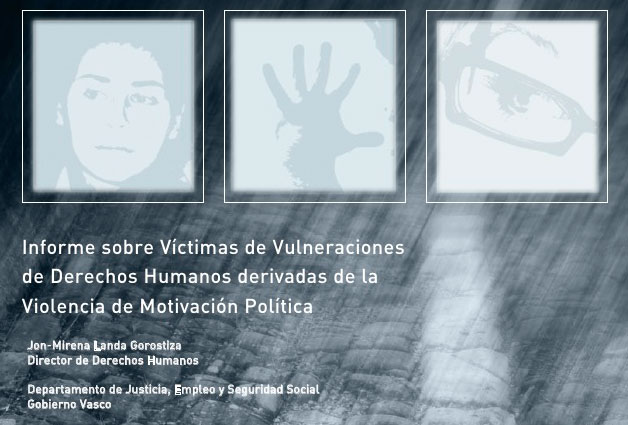 The aim of the report was to make substantive headway in the analysis and recognition of the reality of victims of human rights violations and other unwarranted suffering produced within the framework of the political violence experienced in the Basque Country and that had not been up to then taken into account in public policies, based on the rights and freedoms enshrined in the Constitution and respecting international human rights law.

The report also included specific recommendations to be implemented by competent institutions in their work towards an effective recognition and reparation of such victims.

In order to prepare this report we based our work on the rights and freedoms protected by the Constitution, any international law that seemed to be of reference and, in some cases, the soft law derived from the major international treaties on the matter.

We wanted the report to be technically rigorous, while at the same time adapting the principles and technical criteria to the ultimate purpose entrusted to us by the Basque Parliament that had entrusted us with this task: the recognition in dignified and acceptable terms of all victims of human rights violations or unwarranted suffering incurred in the context of politically-motivated violence.

In drafting this report, I was fortunate enough to work with people like Sabino Ormazabal, Carlos Martin Beristain, Iñaki Lekuona and Jon Landa

You can read the full report here